Book Review: Turn The Ship Around

Turn the Ship Around! A True Story of Turning Followers Into Leaders by Navy Captain (R) L. David Marquet is an inspirational personal account of Captain Marquet’s experiences while commanding the USS Santa Fe nuclear submarine.

Captain Marquet walked his audience through his organization to emphasize a different approach to leadership. Using a “leader-leader” approach to an organization instead of a “leader-follower” model led to the success of the USS Santa Fe nuclear submarine.

All told, I loved this book. It captures the imagination of a nuclear submarine with a clear-cut vision of what Captain Marquet wanted to say. I’ll start with a summary of the book, what I liked, and what I didn’t like. 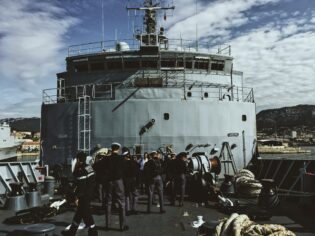 Turn the Ship Around begins with Captain Marquet studying to take command of the USS Colombia, the best submarine of the United States Navy. He studied everything from the crew, maintenance records, accident records, training awards, and deployment documents.

Captain Marquet poured over these documents for over a year and felt like he knew the USS Colombia. However, two weeks before he was supposed to take command, he got a call. Instead, Marquet got reassigned to the worst ship in the US submarine fleet: The USS Santa Fe.

When Captain Marquet took command, he began making changes with the middle management: the chiefs. If the chiefs believed in the ‘leader-leader’ approach proposed by Captain Marquet, then the ship could improve.

Morale on the USS Santa Fe was low. Captain Marquet realized that he was part of a “leader-follower” organization, which hindered progress on important tasks. To counter the antiquated model, Captain Marquet created the “leader-leader” model where everyone was a leader.

The book begins six months before their deployment and works its way through the end of the deployment. Captain Marquet talks about issues they encountered, how he solved them, where he went wrong, and what the crew did correctly.

Now, here are some things I liked about the book.

I liked the way Captain Marquet writes his book because he goes into just enough detail without boring the reader. He’ll often give small accounts of an issue then apply that story to a lesson learned.

He’ll ask questions at the end of each chapter to help the reader apply the leadership concept to their workplaces. It was a nice personal touch from a successful commander to his audience. It’s a novel idea, and he implemented it well.

Captain Marquet’s book was a timeline from the beginning of command until deployment, and then afterward. Also, he split his book into three sections to guide the reader on his journey aboard the USS Santa Fe.

The format helped keep the book alive in my mind. He even incorporated some of his previous experiences on the USS Roy Rogers and applied those lessons to his command of the USS Santa Fe.

While listening to the book, I found myself pondering the same questions that Captain Marquet posed. It made the book applicable to my professional life. I’ll give a brief example of a concept he discussed:

When Captain Marquet first came to the USS Santa Fe, he decided to provide minimal orders while in command. He believed that while he was competent, his junior officers and petty officers needed to run their sections.

The ‘leader-leader’ model is the epitome of empowering subordinates to accomplish their assigned duties.

We often overuse ’empowering our subordinates’ to mean maximum delegation to allow the ‘leader’ to sit back. However, Captain Marquet’s book didn’t portray this concept. Rather, he emphasized decision-making at the lowest level to those who had the proper information to make an informed decision.

Captain Marquet embodied that principle in this book. He resisted giving direct orders that would derail his crew’s efforts. He took a mentorship approach to his command, which was something I liked. 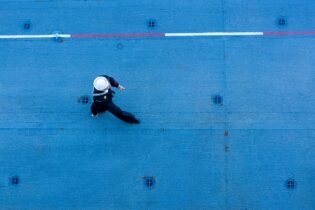 Each chapter provides a new lesson-learned. Theoretically, I could tear a section out of the book and teach a whole class on it. Some leadership books cram many studies, anecdotes, and personal experiences into each chapter, but not Captain Marquet.

The story-like flow helps readers and listeners to follow along easily. For example, he talked about a docking violation his crew committed while on land. He explained it so well that I understood the violation without knowing proper naval docking procedures.

Buy Turn the Ship Around!

I listened to the audiobook that he narrated himself. The performance sounded more nostalgic than instructional. I recommend getting the book and reading it yourself so that you can do your narration.

Although I praised his simplistic writing style, I felt like the book concentrated too much on the zero to hero concept rather than highlighting leadership concepts. The way he phrased things made it seem like, “oh no! Something was wrong, and I fixed it!” It distracted me from his real message of creating a “leader-leader” environment.

Despite this critique, his intentions for the book were genuine. I felt like he did an excellent job of explaining what he wanted. Captain Marquet was an excellent example of an effective leader.

As I said, I loved this book! I recommend it to any leader. My issues with it were small compared to the lessons I learned. I hope to apply his leadership philosophy to my career.

You can buy it here.

6 thoughts on “Book Review: Turn The Ship Around”